Nothing could make me happier than seeing a wine maker… making wine. Even better if he is a fellow Spaniard compatriot. Javier Alfonso, owner of Pomum Cellars, was dealing with a batch of Tempranillo grapes just when I met him is his cellar at the Warehouse district in Woodinville (WA) last week.

This hub of wineries established in small garages is particular. Situated in the outskirts of the city around 50 little size wineries produce wine in a small scale but with great quality.

Many of the wine makers have second jobs and dedicate the evenings and the weekends to their passion. Javier did the same until 2012, when he decided to abandon his promising career as aeronautical engineer to fully focus on Pomum cellars. 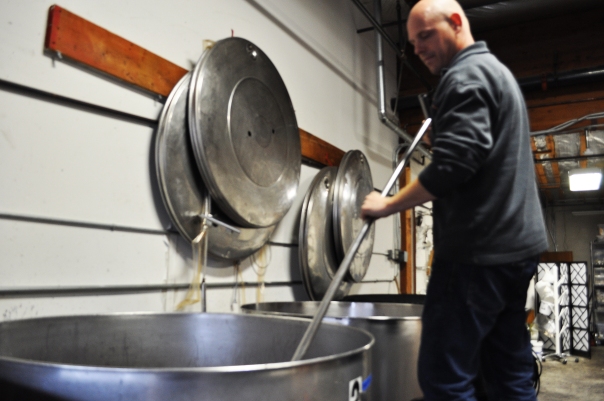 He began to produce wine in 2004 as a weekend hobby in his house garage “We wanted to produce wine for ourselves but our friends loved it and encouraged us to increase our production”. They finally moved to the Warehouse district in 2007 and to their current location in 2010. So, inspiring to know that Pomum occupies today the previous location of Betz wines, one of the most respected brands in Washington.

But Javier brought his love for wine making directly from his roots, a tiny Spanish village that I had the opportunity to visit a long long time ago, Castillejo de Robledo. In that historical gem his family has vineyards that belong to the DO Ribera de Duero, one of the most important wine areas in Spain.

“I soon realized that the continental climate of this region in Spain was really similar to the characteristics of  the Eastern Washington desert. With hot short dry summers and long and cold winters” this area is blessed with the Yakima and Columbia river waters. Javier picks the grapes cultivated exclusively for him for farm contractors in the Yakima valley area. Climate and soil are the key factors in wine making: “soil gives flavor, climate gives viability”

He wanted to give a chance to our national grape, Tempranillo to grow up here in Washington, and as a pioneer he brought the first vine from Spain in 2005. “It was a long and complicated process managed through a Spanish scientific institution and the UC Davies in California because they had to check, clean and classify the vine to give it the final blessing”. To get an idea about how special Idilico wines are nowadays only around 20 wineries in Washington work with Tempranillo varieties and only 5 with Albariño grapes.

You can find two more Spanish grape varieties, Tinta de Toro and Graciano, in the Idilico wines: “Spanish vines, Washington wines,” as he explains with an open smile. But you only can get them through the wine club or dining in one of the restaurants that carry this wines in their wine menu in the Seattle area.